Be careful: Suez fake and retired...

Put into circulation in 1945 occupied by the French and allied troops territories, notes the "Treasury French" were also used by the troops based in Cyprus and the ships of the squadron of the Suez expedition in 1956, with "French Forces in the Eastern Mediterranean" and are identified by the presence of two black loads obscuring the words "occupied Territories" (see pictures below). 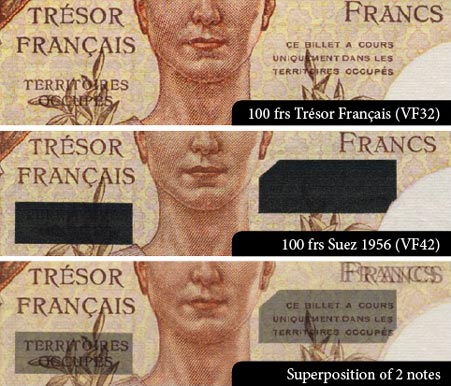 The great history keep the Suez expedition on 5 and 6 November 1956 tour will be short... but at the beginning of the year 2014, it is a new war begins... or rather a new crusade billetophiles against the "swindlers" all kinds... Already last spring, Jacques Dutang (Kajacques Numismatique) attracted the attention of Claude Fayette on the possibility of the existence of false 100 frs Suez. In May, Claude Fayette published on its website a chronic #21 in response to this warning! 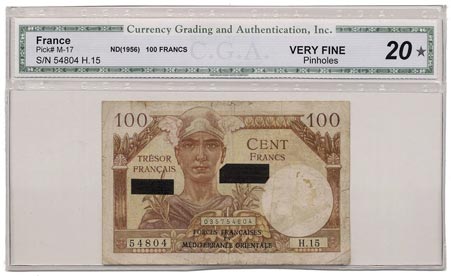 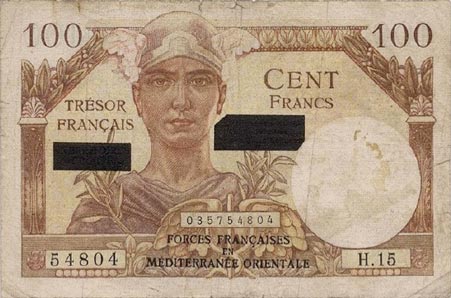 A rare traffic note to a rare note limit!

Of course, you will say, but how can he know that this note is a fake? This is simply the serial number H.15 of this post that caught my attention!

In my personal score of 100 francs French Treasury, I recognizes the serial number only 6 copies, for a total of 374 banknotes (see table below).

This is because this series is rarely found that the false Suez caught my attention. Poor forger! Take a rare enough to make it a rare... there's of course notes famous previous example with the 1,000 francs Marianne type 1945 letter H (VF13.3). See an example in the catalog: Here.

Finally, to make the trick perfectly credible, it outperforms the note in a state with a VF "CGA" Currency Grading and Authentication certification...

For the little story, the real note H.15 - No. 54804 was sold in June 2011 for a few dollars in "F" grade, perhaps "VG" grade (see screenshot of the ad below). We can not stress enough the need to remain cautious about the cuts you have... very soon in an upcoming BN. Yann-Noël Hénon. 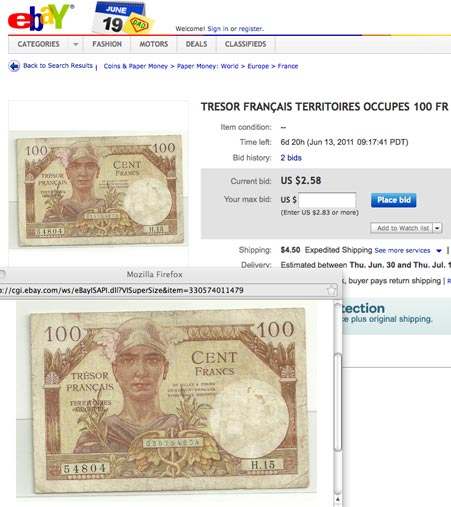